In the sixth chapter of her major work, Science and Health with Key to the Scriptures, Mrs. Eddy refers to her own preparation for the discovery of Christian Science saying “God had been graciously preparing me during many years for the reception of this final revelation of the absolute divine Principle of scientific mental healing. This apodictical Principle points to the revelation of Immanuel, “God with us,” — the sovereign ever-presence, delivering the children of men from every ill “that flesh is heir to.”” (S&H 107:3-10) Recognizing the significance of her discovery and its value to all Christians and the Christian Church throughout time, she knew that to keep the discovery to herself, was not an option. It had come to her to be shared, and her great love for mankind is proved in the dedication of the rest of her life to doing just that. We get a glimpse of what that cost her from the statement in her book The First Church of Christ Scientist and Miscellany: “Millions may know that I am the Founder of Christian Science. I alone know what that means.” (My. 249:19)

This section of our exhibit, entitled “Gracious Preparation”, addresses in detail the issue of preparation for understanding Christian Science.  Robert Peel historian and author of a definitive three-part biography of Mrs. Eddy, guides us to the record of Mrs. Eddy’s own gracious preparation. 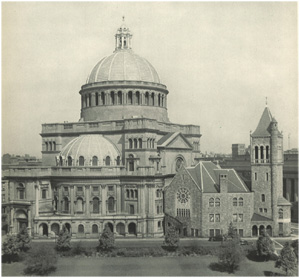 Mr. Peel’s experience, education, and scholarship earned him his role as pre-eminent historian and biographer of the Discoverer and Founder of Christian Science. Born in England, and educated in three countries, he spent part of his childhood in Boston, and had the privilege of attending the Sunday School at The Mother Church. He graduated from Harvard with highest honors, and remained there to study and teach for six more years. During this time he held the post of Professor of History. After service in World War II, (part of the time as an officer in counterintelligence,) he became an editorial writer for The Christian Science Monitor and began a new career as an author. Mr. Peel has also served The First Church of Christ, Scientist as an editorial consultant.

During the time he was researching and writing his three-volume biography of Mrs. Eddy, he was given full access to all the information in the Archives of The Mother Church, including information which had not previously been open to scholarly research.  He was a man of keen intellect, and a rigorous historian who personally interviewed many of the early workers in the Christian Science movement in researching his biographies of Mrs. Eddy.  In addition to much factual information, he includes in his books commentary about Mrs. Eddy’s thinking and motives gleaned from his extensive research, which spanned decades.  His standard practice was to include information in the biographies, only when it could be validated by other substantial evidence, including and especially Mrs. Eddy’s own correspondence.

In the first book, “Mary Baker Eddy: The Years of Discovery” Mr. Peel records with his usual in-depth historical scholarship, the life, spiritual research, and medical experiments that prepared Mrs. Eddy for her discovery of Christian Science, and for writing the Christian Science textbook, “Science and Health with Key to the Scriptures”. However, it is in the third book, “Mary Baker Eddy: The Years of Authority”, that Mr. Peel introduces the reader to the significance of the new ordering of the chapters in Science and Health in the 1902 revision. It may be a surprise to the newcomer to know that Mrs. Eddy did not write Science and Health during the years from 1872 to 1875, and then leave it unchanged. She constantly revised it until the final 1910 edition. Some revisions were relatively minor, and some involved both substantial editing and reorganization of material, as in the 1902 edition.

In describing the re-organization in the 1902 edition of Science and Health, Mr. Peel, wrote: “A different kind of logic came into play in the final order which the chapters of Science and Health took in this edition. There had been a good deal of rearranging of material in the major revisions of earlier years, and for the past decade the book had started off with the chapter,  ‘Science, Theology, Medicine’, whose opening words read: ‘In the year 1866, I discovered the Christ Science…’ [wording conformed to the 1910 edition.] This was a logical starting point but not a particularly winning one. The author went on in the next sentence to state that God had been ‘graciously preparing’ her for many years to receive this revelation. By now, however, she had come to the conclusion that the reader, too, needed some gracious preparation for such apodictic assertions. The new arrangement, which remains today, followed a new logic, – the logic of her own early development.” (Mary Baker Eddy: The Years of Authority. pp189-190)

The first five chapters reveal in-depth the spiritual steps she was led through in preparation for the discovery of Christian Science, and which she felt were equally necessary for us to take to be prepared to fully understand and practice this revolutionary Science. This Divine Science is fully explained in the rest of the book.

In the following sub-sections, some of the foundational Christian values found in the first five chapters of Science and Health have been selected and then a few of them are examined by identifying Biblical references supporting them. It may be helpful to the newcomer to note that the order of the first five chapters in Science and Health in the 1902 edition, and in all subsequent editions is: